Aesthetics of dying, family as a unit of care and the last vital breath in Kashi, India’s sacred city.

This ethnographic film explores the way in which Hindu pilgrims and their families stage a distinctive politics-of-care, while they anticipate and create the possibility of Moksha for their dying relative in Varanasi, India’s holy city. This research examines audiovisual ethnography as it facilitates a performative space that allowed me and my interlocutor Shiv to navigate the holy city and improvise different possibilities for his mother’s Moksha during his ten-day stay in Varanasi. The film premiered internationally in 2019 at the Royal Anthropological Institute (RAI) Film Festival in Bristol, UK. 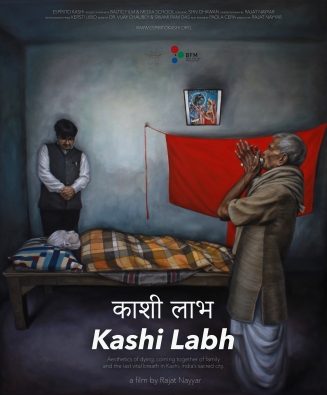 For Hindus, death should come at home or at one of the sacred Hindu pilgrimage cities. Kashi, India’s holy city situated on the banks of river Ganga, is especially favored, for it is said that the souls of all who die there immediately attain Moksha (Parry 1994, 27). During our research collaboration in 2018, Shiv understood Moksha as the process of “fulfilling his mother’s final wish to release her last breath in Kashi” and staging new futures for his family. We first met at Kashi Labh Mukti Bhawan, a salvation home in the holy city that offers a devotional space to families seeking Moksha for their terminally ill and dying relatives. Attending to his mother’s call for Moksha, Shiv had to shut down his busy tailor shop in New Delhi, and with his son, he drove slowly toward Kashi for twelve hours, ensuring that the ride was comfortable for his mother, who lay on the back seat of the car. This was followed by a ten-day stay at the salvation home in Kashi, where he waited and engaged in ‘everyday projects,’ while anticipating the possibility of his mother’s last breath in Moksha. Shiv’s performances of the possible in Kashi, speak about a politics-of-care that is embodied and emerges from spiritual beliefs within Hindu ontologies and cosmologies.

During the ten days of research with Shiv’s family, I realized that Moksha is an embodied knowledge of care that is transmitted through generations in the form of religious stories, and is grounded in the everyday adjustments of making it a possibility (as future), rather than a philosophical argument (Jackson 2014). During our walks with the camera through the labyrinth-like network of narrow streets, we began to improvise small, daily projects. These projects represented Shiv’s distinctive politics-of-care, for they heightened the possibility of his mother’s Moksha. In attending to such unintended imaginaries (Kazubowski-Houston 2017, 115), the camera attuned us to the affective and embodied dimensions of Shiv’s politics-of-care. This approach to audio-visual ethnography further allowed Shiv to take an active role in setting the direction of the film and impacting his family’s future. Based on our critical intervention within the everyday performances of the possible, I re-consider the anticipatory and the creative potential our research, and how it facilitates collaboration and reflexive creation of ethnographic knowledge.